Philadelphia-based DIY artist Alex Giannascoli first started picking up plaudits for his homespun indie-rock back in 2010, with the release of his debut LP RACE. Still only 22 years old, he’s now releasing his seventh album via esteemed indie Domino Recordings. We caught up with him to find out more about his musical background and to hear the story behind the brilliant Beach Music. 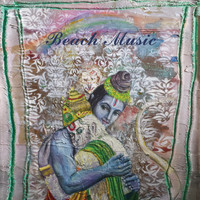 Hi Alex, can we talk about your musical background, please? What’s your earliest musical memory?

My earliest musical memory is probably listening to my brother play the saxophone, when I was a little kid.

Are you from a particularly musical family?

No, [it’s] just me and my brother. I have an older brother and an older sister, and my sister paints. It’s not her job or anything, but she’s pretty passionate about that.

Every year I learn that I’m not as cool as I thought I was.

When did you begin playing music yourself?

I’ve been playing ever since I was a little kid. Like, I was never very good, but I would play the keyboard and stuff; whatever my brother put down, I would sort of play around on it, you know? When I was young I took piano lessons, but I wouldn’t practise so it just wasn’t worth it. It was no fun.

Which artists inspired you, growing up?

Most of the artists that inspired me are the ones that my sister would show me. My brother played a lot of jazz music and that’s what he performed, but he didn’t really listen to music that much. But my sister listened to a lot of 90s alternative stuff.

When I was pretty young, I listened to Moby a lot, and I think that’s what got me started on music because I really liked him, and that was the only thing I would listen to. And then when I got a little older, I listened to Modest Mouse and Radiohead, and I think those bands probably were what really hooked me and inspired me to make music all the time. I would just listen to them on repeat all day.

When did you start writing music yourself?

When I was 13 or 14 I would start going to see shows. There are a lot of venues in Philly that are pretty easy to get to, so I would go and see bands that I liked. That’s just what inspired me to get going. I think I was lucky to be around a group of people that all felt like me about music, and they were all starting bands and playing parties, so it was pretty easy for me to fall into that routine too.

So Beach Music is your seventh album, right?

Some musicians describe the creative impulse as a hunger, or as something they’re compelled to do. Is it the same for you?

Yeah, it’s kind of like that. It makes me feel stupid if I don’t do it? So I do it because I feel as if I’m supposed to do it or something.

Are you naturally a really prolific writer?

I don’t think I’m especially prolific or anything, but I think the difference between me and artists who don’t release much music is that I have this means of recording in my house. I just get right to it once I write a song; I don’t wait until I get time in a studio or something, you know? I don’t know if it’s some special talent or something, I think that it’s just easy for me to record.

Can you tell us about your home studio?

Yeah, it’s not exactly a studio. It’s just that I have a guitar, I have a keyboard and I have a microphone and a laptop in there, and I just put a microphone in front of whatever I’m recording. And then when I’ve gotta record drums, or some other instrument that I don’t have, I just drive to a friend’s house or whoever has it and then I stick the mic in front of that and record it. I guess I’m like a mobile studio – it’s just my laptop and my mic.

How have the DIY community taken your decision to sign with Domino?

I think the people I hang around with are all pretty supportive. At least, to my face they’re supportive (Laughs) They could be talking sh*t about me behind my back. But, as far as I know, they’re all cool. And I try to help everybody out when I can.

And how are you finding working with them?

Yeah, it’s really cool. To feel like I have a label behind me is really freeing and I don’t have that stress of what I’m going to do to make some money, you know? I guess the downside is that there’s a little bit of pressure to do PR and get pictures taken, and do things to advertise yourself, and that’s one thing I really don’t like doing. But I think it’s worth it to have this career security. I mean, who knows how secure this career is. (Laughs) But, at the moment, it feels like the right thing to do.

You were still at college when you released your last album, DSU. How did being a full-time musician impact on the creative process for Beach Music?

It hasn’t really. When I was doing DSU, I’d have work or school every day but then I would be home every night, and if I had nothing going on I would record something. With Beach Music, I had all this free time but there were months that were taken out because of having no opportunity to record while I was on tour. So, as far as the time that I was able to dedicate to recording, it was about the same, but I guess that the amount of time between recording sessions was longer, so it made for a more disjointed album or something. The songs seem more removed from each other than they were on my last album.

Was there a song that paved the way for the rest of the record?

The first track that I finished was ‘Bug’, and I think it did clue me in to where I was heading. But then it wasn’t something where I saw ‘Bug’ as a template, and then I had to make songs that fit the qualities that ‘Bug’ had. It was just pretty representative of the where my interests were, as far as the sounds that I was using in those couple of months that I recorded the album.

In an interview with Noisey, you described the songs from Beach Music as being “weirder” than those on DSU. Can you elaborate on that, please?

I think [with] this one, I explored whatever idea I had in more depth, without being tied down by having a guitar, drums and bass. I felt comfortable enough that I could just discard whatever structure I had. I was still using the guitar because that’s the instrument that I had most accessible, but I just didn’t feel like I had to. It’s not typical guitar music.

The album was self-recorded but you did go into a studio for mixing and mastering, right?

Yeah, I went to Jacob Portrait’s studio in Brooklyn. He’s the bass player of UMO, and he mixed everything. And then it got sent away to be mastered.

As someone who has always worked totally independently in the past, how was it relinquishing that control?

It was really hard for me at first. Well, not really hard for me, but I had a lot of apprehension about it. But I was able to sit with Jake the whole time that he was mixing, and I could sort-of direct him, so it was never that uncomfortable for me. And I was actually really impressed with how much of a difference he could make for the better. He really made it sound a lot clearer, I think.

Is there anything you’ve learned about yourself in the making of this album?

Why do you say that?

Yes, definitely. It’s a pretty scattered album and I think that’s what I stand for: my music is not tied down to one specific sound, and I think this album is a good representation of that. Yeah, I think I did a good job. I did my best, so, that’s all I can do.